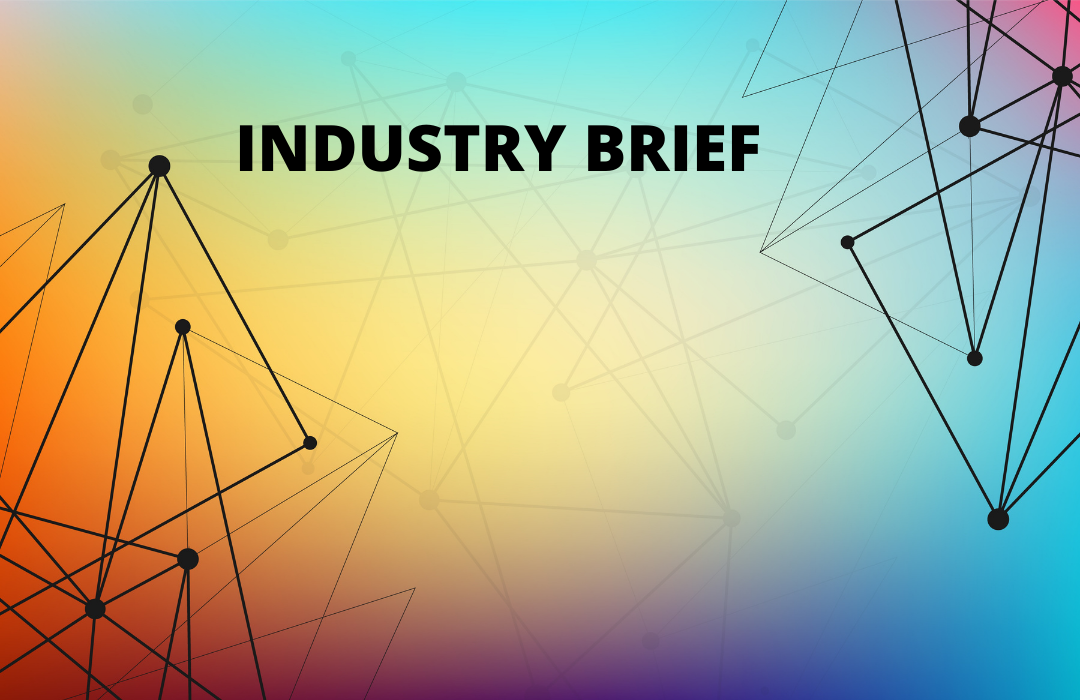 If 2022 is the year of consolidation, then the first three weeks of January serve as a litmus test for what we might expect for the year. There is no better example of consolidation in the games industry than what’s transpired so far in 2022, and we’re only in the third week of January.

Microsoft is the second largest company in the world after Apple, with a valuation of $2.2 trillion. This acquisition makes Microsoft the third largest game company in the world, behind only Tencent and Sony which had $29 billion and $25 billion in game revenue respectively in 2021. Microsoft’s Xbox division has $15.3 billion in revenue, add to that Activision Blizzard’s revenue of $8.1 billion, for a combined revenue of $23.4 billion for the year.

The impact of the Activision/Blizzard acquisition can not be overstated as it marks a significant powershift that will lead to undeniable changes in the industry going forward. The financial market seems to think so as well, with Sony shares dropping 13% on the news, losing over $20 billion in valuation in a single day. This is the largest single drop in their stock price since 2008 when the company had to recall 100,000 laptops for faulty batteries. Additionally, some of the remaining independent third-party publishers such as Capcom, Square Enix, Konami and Ubisoft saw their stock price jump 5-10%.

There are obvious advantages that the acquisition brings to Microsoft. As the largest third-party game publisher in the world, Activision has maintained a strong position not only in consoles but also with PC and mobile platforms thanks to games like Destiny 2, Call of Duty: WW2, and Candy Crush. This now gives Microsoft a leading position across all console, PC, mobile gaming.

The following table shows the current breakout of Activision Blizzard’s revenue by platform:

In Activision’s last quarterly statement from November 2021 the company stated there are currently 390 million monthly active users (MAUs), which has dropped from it’s high in early 2021 of 435 million users. The King division, with Candy Crush makes up the bulk of active users at 63% of the total, while Activision is at 31% and Blizzard at 7%.

According to their quarterly report, monthly active users across COD titles grew 40% year-over-year and have tripled since 2019, reaching 150 million in the first quarter of 2021. The company’s Blizzard segment revenue grew by 7 percent, bolstered by the World of Warcraft: Shadowlands expansion, and had 27 million monthly active users in the quarter.

Activision’s Call of Duty franchise has been key to the company’s success, particularly the free-to-play games, including Call of Duty: Warzone and Call of Duty: Mobile, with in-game purchases for various PC and console versions growing 60%.

Candy Crush was initially launched back in 2012 by King and in 2016 Activision acquired King for $5.9 billion in early 2016. In 2020 Activision’s King product segment has grown 22% year-over-year and their advertising business has grown 60% with Candy Crush alone raking up $1 billion in in-game purchases, while Call of Duty: Mobile has reached lifetime earnings of $1 billion.

In October 2021, Activision acquired Barcelona-based mobile game company, Digital Legends for an undisclosed amount. Digital Legends specializes in mobile shooters and has published Afterpulse and The Respawnables. It was noted at the time of purchase that Digital Legends will be working on a new, yet to be announced Call of Duty mobile game.

Microsoft CEO Satya Nadella has to say about mobile:

“Mobile is the largest segment in gaming, with nearly 95% of all players globally enjoying games on mobile. Through great teams and great technology, Microsoft and Activision Blizzard will empower players to enjoy the most-immersive franchises, like “Halo” and “Warcraft,” virtually anywhere they want. And with games like “Candy Crush,” Activision Blizzard´s mobile business represents a significant presence and opportunity for Microsoft in this fast-growing segment.”

Another area where Microsoft is now positioned to lead is in esports thanks to the presence Activision has built up over the years. Activision Blizzard’s Esports has been a staple in the esports space since 2015 when it launched the first competitive gaming event.

Unfortunately the pandemic has wreaked havoc and live in-person esports events have definitely suffered, but Activision has just recently started up their esports activities again. The CDL season started on Friday in Arlington, Texas and the OWL season is set to start in-person events this April.

Aside from Activision’s games as esports franchises, the company acquired Major League Gaming in 2015 with the goal to have the platform become the “ESPN of Esports”.

Statica lists Activision as having the largest share in esports at 21.8%, meaning that position will now belong to Microsoft. 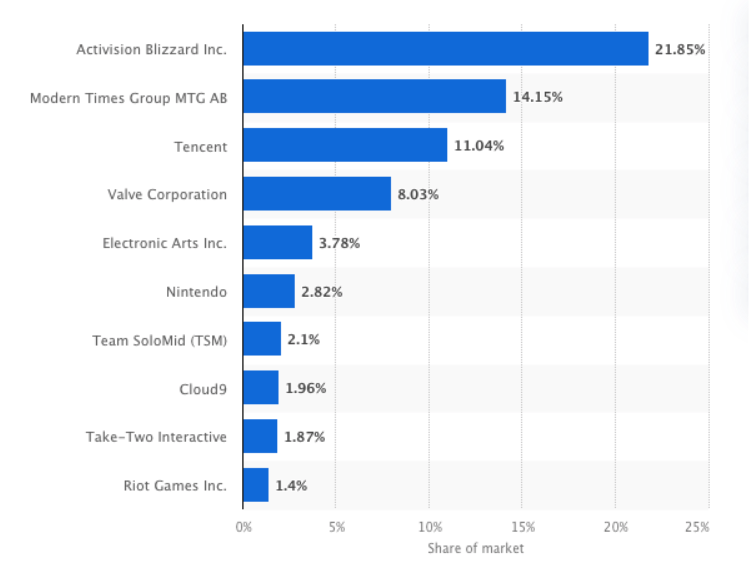 Activision does not break out eSports revenue but instead allocates it to the “Other” operating segment which also includes the company’s distribution business in Europe, which totaled $687 million in 2020. Their “Other” segment increased 82% between 2016 and 2019 and we estimate Activision’s revenue in esports to be between $300 – $400 million.

Unfortunately, in 2021 Activision Blizzard was been plagued by claims of sexual and racial discrimination (read more here). As a result of the fallout both the Overwatch and Call of Duty Leagues have both seen a number of key sponsors distance themselves from the company including State Farm, Coca Cola, Kellogg, ASTRO Gaming. Hopefully under the guidance of Microsoft, these sponsors will return.

For it’s part, Microsoft acquired Smash.gg back in 2020. Smash.gg is a platform that enables amateur players to run their own esports tournaments. The company also relaunched Halo into the competitive circuit for Halo, and had a series of events back in December 2021.

Activision’s business model for esports is very different from Microsoft’s. Activision charges team owners a licensing fee whereas Microsoft has followed a microtransaction model with Halo Infinite, similar to Fortnite, where consumers can buy in-game virtual products such as customized armor .

Back in early 2020 Activision inked a deal with Alphabet’s YouTube group to be the exclusive live broadcast platform for all of Activision’s esports properties. The deal, valued at $160 million over 3 years, also had incentive provisions for ad sales and viewing targets. In addition, Activision agreed to use Google Cloud as its cloud computing service.

One can assume that once the deal goes through Activision’s products will be moved from Google Cloud, where most of the games have been hosted since the 2018 YouTube partnership, to Microsoft Azure. The original partnership with Google was for a period of three years, which means the agreement is up in 2023, when the Microsoft acquisition would take effect.

Owning about 20% of the $150 billion cloud service business, Microsoft’s Azure is the second largest service in the world. Only Amazon Web Services is bigger, with about 34% of the market. Google Cloud comes in third at only 9% of the market. 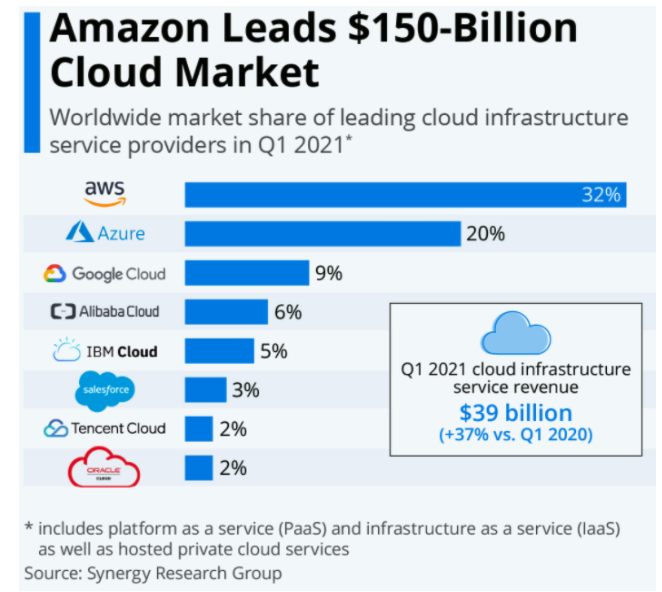 Once Microsoft acquires a company they typically like to move them onto the Azure servers. For example, Microsoft acquired Minecraft developer Mojang in 2014 and has slowly moved the game over to Azure, with insiders saying the transition was finally completed in 2020. The same migration will be true of the Activision Blizzard portfolio of games.

Additionally, it squarely puts Microsoft’s Xbox Game Pass ahead of any other company in terms of cloud gaming. Xbox Game Pass launched in 2017 and currently has 25 million subscribers, up from 15 million in 2020. Microsoft can now tap into Activision’s 390 million active monthly users, in 190 countries. This makes the Xbox Game Pass service an impressive selling point for consumers.

The main competitors in cloud gaming include Nvidia’s GeForce Now with 12 million subscribers, Electronic Arts with 13 million subscribers at the beginning of 2021, Sony’s PlayStation Now with 47 million and Nintendo Switch Online with 32 million.  In Microsoft’s announcement of the acquisition the company stated: “The acquisition also bolsters Microsoft’s Game Pass portfolio with plans to launch Activision Blizzard games into Game Pass, which has reached a new milestone of over 25 million subscribers. With Activision Blizzard’s nearly 400 million monthly active players in 190 countries and three billion-dollar franchises, this acquisition will make Game Pass one of the most compelling and diverse lineups of gaming content in the industry. Upon close, Microsoft will have 30 internal game development studios, along with additional publishing and esports production capabilities.”

With the Activision acquisition, Microsoft will have paid $80 billion to own 30 internal studios, and that doesn’t include the investment it’s made to date on Xbox itself. It should be a very clear alarm for its competitors that it is looking to change the landscape of the games industry.

Let’s take a look at the acquisitions Microsoft has made to date.

When it comes to immersive technologies Microsoft has been an early leader for years with the launch of the Hololens in February, 2016. Due to the price of the Hololens (base price: $3500), it has been positioned primarily as an enterprise-level headset. However one can reason that a consumer initiative could be right around the corner, which plays perfectly into expanding Microsoft’s move to the metaverse.

At Microsoft’s Ignite Conference in March 2021, the company announced Mesh, a mixed reality platform that enables shared immersive experience that combines both the virtual and physical worlds. Built on Azure, the Mesh platform takes advantage of hand and eye tracking, holograms, AI and 3D models.

Again, in April of last year during Microsoft’s quarterly earnings call, Satya Nadella, chairman and CEO, Microsoft said, “As the virtual and physical worlds converge, the metaverse…is emerging as a first-class platform. Microsoft’s gaming communities, like “Minecraft” and its then-140 million monthly users, could grow into huge commercial marketplaces “as games evolve into metaverse economies.”

Then at Microsoft’s Ignite Fall in November 2021, Nadella went into more detail about how the company is positioning for the metaverse with a comprehensive set of services and technologies that includes Microsoft Teams, Hololens, Azure, and more. 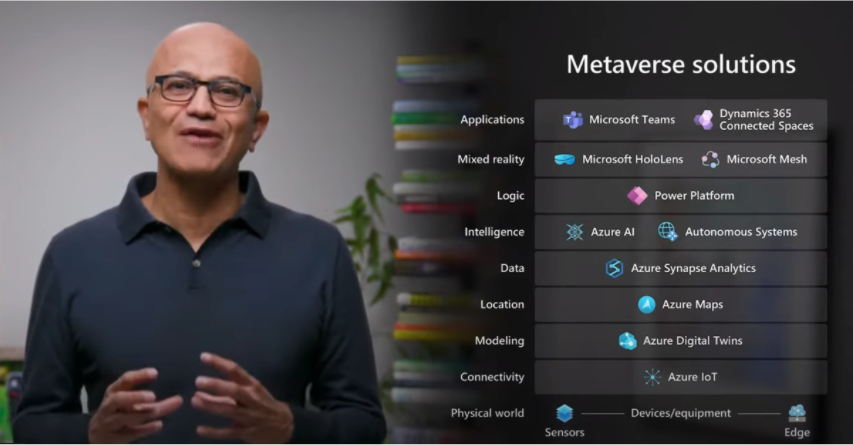 And let’s not forget that late 2017 Microsoft acquired remnants of AltspaceVR. At the time Microsoft was looking to combine real-time experiences with an immersive presence, which has now become the center for how the company is defining what they are doing in the metaverse.

We believe Microsoft’s biggest impetus for the Activision acquisition is centered around the metaverse. In the company’s announcement of the deal, Satya Nadella, chairman and CEO, Microsoft commented that:

“This acquisition will accelerate the growth in Microsoft’s gaming business across mobile, PC, console and cloud and will provide building blocks for the metaverse.”

“Gaming is the most dynamic and exciting category in entertainment across all platforms today and will play a key role in the development of metaverse platforms. We’re investing deeply in world-class content, community and the cloud to usher in a new era of gaming that puts players and creators first and makes gaming safe, inclusive and accessible to all.”

Activision’s biggest games are already multiplayer and the company has been doing in-game microtransactions for over 22 years when they first launched two virtual pets available in World of Warcraft for $10 each.

Activision Blizzard is an expert in multiplayer, microtransactions, have a solid foothold in all platforms from PC, to console, and mobile, and fit perfectly into Microsoft’s larger metaverse vision we see taking shape.