Epic Games Brings on Sony Corporation as a Partner

Last week, Sony shook up the gaming world with the news of its $250 million strategic investment in Epic Games. What’s particularly intriguing is that the investment was made by Sony Corporation, making it clear that the deal  includes all the Sony business groups: Sony Pictures, Sony Music, Sony Interactive Entertainment, Sony Electronics, Sony Semiconductors, and others. A deal between Epic and Sony Interactive Entertainment (SIE) and Playstation is obvious, but this deal is with the parent company, Sony Corp. So, what are the implications and what can we expect?

Kenichiro Yoshida, Chairman, President and CEO of Sony Corporation underlined the nature of the deal saying, “through our investment, we will explore opportunities for further collaboration with Epic to delight and bring value to consumers and the industry at large, not only in games, but also across the rapidly evolving digital entertainment landscape.”

The synergies and opportunities between the two companies have far reaching implications. Individually, each company has strong brand properties that can be leveraged across the other’s markets. In addition, this investment cements an already close relationship between the two companies and reinforces the shared mission to advance the state of the art in technology, entertainment, and socially-connected online services.

The investment allows Sony and Epic to aim to broaden their collaboration across Sony’s leading portfolio of entertainment assets and technology, and Epic’s social entertainment platform and digital ecosystem to create unique experiences for consumers and creators. The closing of the investment is subject to customary closing conditions, including regulatory approvals.

Sony’s Kenichiro Yoshida expanded on this saying, “Epic’s powerful technology in areas such as graphics places them at the forefront of game engine development with Unreal Engine and other innovations. There’s no better example of this than the revolutionary entertainment experience, Fortnite.”

The Sony brands include a staggering number of properties and artists that could be used to build out interactive and entertainment experiences.

Fortnite and the Metaverse

Epic’s Battle Royale game, Fortnite launched in July, 2017 four months after the success of PlayerUnknown’s Battleground, a Battle Royale game from Bluehole subsidiary PUBG Corporation. Fortnite has gone on to become one of the most successful games of all times, with over 350 million registered users. Revenue derived from the game reached $400 million in April alone, with hours logged at 3.2 billion for the month. Put into perspective, in one month Fortnite generates more revenue for Epic than the entire Sony investment. It’s not about the money and more about convergence and cross-promotion opportunities.

Regarding the Sony investment, Epic’s CEO, Tim Sweeney said, “Sony and Epic have both built businesses at the intersection of creativity and technology, and we share a vision of real-time 3D social experiences leading to a convergence of gaming, film, and music. Together we strive to build an even more open and accessible digital ecosystem for all consumers and content creators alike.”

Sweeney has long shared his views on the future metaverse, and sees Fortnite as more than just a game. It is a step towards the metaverse experience. A good example of what he’s envisioning is the recent virtual concert presented by Epic and Travis Scott, called Astronomical. On April 24 more than 12.3 million concurrent players watched the concert within Fortnite, the most people ever brought together at an in-game location.

These numbers do not include the additional 72 million views on Youtube the concert has since received. Of course Travis Scott is signed to Epic Records, a subsidiary of Sony Corp. thus bringing the experience full circle.

Sony tried to do something similar back in 2008 with Sony Playstation Home, otherwise known as Sony’s “most successful failure.” Home was a virtual 3D social platform where players could create their own avatars, create personal and public spaces, and play both single and multiplayer games. At the height of its success, it was said that Home had upward of 41 million users. Brands like Red Bull and Billabong gave Home lucrative advertising revenue. However, in March 2015 Sony shut down Home without much explanation. People involved with the project have said it was due to technical issues with the platform as well as issues moving it to the Playstation 4.

Games, of course, are the most obvious place where the synergies exist between Epic and Sony Interactive Entertainment (SIE). In particular with the imminent launch of the PS5 scheduled at the end of this year.

Last month Sony Interactive unveiled their official PS5 showcase with a number of exclusive PS5 games including Ratchet & Clank: Rift Apart, Marvel’s Spider-Man: Miles Morales, Horizon Forbidden West. In the past Sony has maintained a fairly closed development ecosystem with regards to using third-party technology, with many of Sony’s first-party studios maintaining their own tech IP and proprietary game engines.

M2 Insights analyzed all the games announced for the upcoming PS5 and found internal engines still make up almost half 46% of all game engines when combining: AnvilNext (Ubisoft) at 5%, Frostbite (Electronic Arts) at 4%, and other Internal Engines at 37%. The Unreal Engine represents 30% of all announced Playstation 5 games. 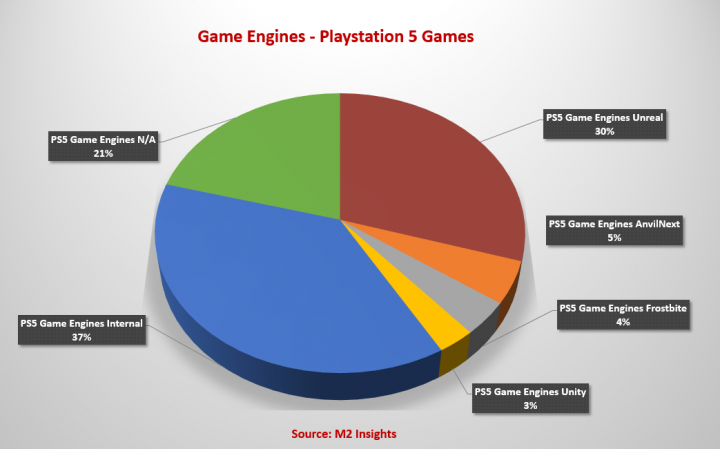 Epic has done a fantastic job building up their developer programs and support, and it’s definitely paid off. They have also added extensive online tutorials and educational programs, launched their Megagrants program for funding support, and created the Epic Games Store for discovery and sales of third-party games.

Epic claims there are currently over 7.5 million developers using the Unreal Engine. With both the Xbox Series X and Playstation 5 coming on line by the end of the year, as well as the upcoming release of the Unreal Engine 5, and expanded demand into other markets, we expect Epic’s market share for the Unreal Engine to increase over the coming years.

While the Unreal Engine 5 will not be available until late 2021, Epic took the opportunity at the Sony Playstation 5 unveiling in May to show off a real-time tech demo of the Unreal Engine 5 running on the PS5 dev kit, which already has over 13 million views.

Called Lumen In The Land Of Nanite, the demo highlights a number of new technologies:

Sweeney also made public reference to Sony’s SSD storage saying it gives the PS5 a significant competitive advantage. “We’ve been working super close with Sony for quite a long time on storage. The storage architecture on the PS5 is far ahead of anything you can buy on the PC for any amount of money right now. It’s going to help drive future PCs.”

Virtual Production for Film and Television

Epic’s technology has been used in film production for almost 20 years. As far back as 2001 Steven Speilberg was working with Epic on the production of Artificial Intelligence.” Since then Epic has worked on numerous movies including The Lion King, Rogue One: A Star Wars Story, Finding Dory, Ford v Ferrari, Star Wars: The Rise of Skywalker, and the upcoming Batman movie.

There are also an increasing number of television shows working with Epic including ILM on the hit shows The Mandalorian and HBO’s Westworld. More and more studios are looking at virtual production with the objective of building virtual sets as a more viable way to save on production costs.

The use of virtual production has become increasingly important in film and television production since the pandemic hit with many studios working to find business models that work. In a recent interview with XR For Business, Epic’s General Manager, Mark Petit commented, “In the time of Covid we are able to bring the location to the talent instead of the talent to the location.”

Back in January 2019 Netflix sent out its quarterly letter for Q4 out to shareholders saying that their biggest threat and rival was not HBO or Disney, but Epic Games. In the letter Netflix CEO, Reed Hastings writes, “We compete with (and lose to) Fortnite more than HBO. There are thousands of competitors in this highly fragmented market vying to entertain consumers and low barriers to entry for those great experiences.” Since then Netflix and Epic partnered to bring characters from Netflix such as the cast of Stranger Things and Chris Hemsworth character from Extraction into Fortnite.

Epic has also been on a bit of a buying spree, having acquired 7 companies in 2019 and one this year so far. These acquisitions represent the company’s focus on building up its technologies around real-time animation, modeling, development tools, cross-platform support and social platforms.

Several sources told GamesBeat that in 2019 the company reported $4.2 billion in revenue and $730 million in earnings before interest, taxes, depreciation, and amortization (EBITDA, a key measure of profitability). Revenue for 2020 is forecast to be $5 billion, with EBITDA of $1 billion. In 2018, Epic Games did better than it did in 2019. Revenue in 2018 was $5.6 billion, with EBITDA of $2.9 billion, sources said. Epic has been able to use a lot of that money to invest in its Epic Games Store, expanding its staff for Fortnite and Unreal Engine, and some acquisitions.

The investment gives Sony a minority stake in the company of 1.4%, putting Epic’s current valuation now at a staggering $17.86 billion. While this is a far cry from the 40% ownership Tencent received for the $330 million they invested in Epic back in 2012. It was Tencent’s investment that bumped Epic’s valuation to $825 million.

But things have changed in the last 8 years. In 2012 Netflix’s revenue was $3.6 billion, half a billion less than what Epic did in 2019. Real-time technologies have advanced, streaming content is pervasive and Epic is not the same company it was 8 years ago. Not only have they greatly expanded their Unreal game engine business, they’ve launched the Epic Games Store that now rivals Valve’s Steam Store, and they created the single most successful game of all times with the launch of Fortnite.

Tencent’s investment couldn’t have been more perfectly timed, and was instrumental in helping Epic better position themselves as essential across multiple industries.  At that time it was not obvious just how much Tencent’s investment would impact Epic’s growth trajectory.

Given Tencent’s extensive online distribution network and access to Asian markets, it would make sense for Epic to tap into that expertise when looking to build out Fortnite. A year after Fortnite successfully launched, and in 2018 Epic successfully raised $1.3 billion, bringing the company’s valuation to $15 billion. With Sony’s investment, it now brings the total investment to $1.8 billion with a pre-money valuation of $17.5 billion.

For the time being Tim Sweeney continues to maintain majority control of the company with over 50% ownership while combined, all current investors represent less than half the ownership: Tencent with 40%, Sony with 1.4% and the other investors owning single digit percentages. However if Bloomberg’s reporting from June is correct, Epic is close to raising an additional $750 million in a separate raise, it may tip the company’s ownership breakdown.

Epic has found itself in the enviable position of having the tools, developers, consumer products and distribution platform that companies like Tencent, Sony and Netflix are all jockeying to access. Whether its building the metaverse, creating tools that help other game developers excel, or supporting film and visual effects companies Epic seems to have the magic touch at the moment and it appears unlikely that anyone will catch them.